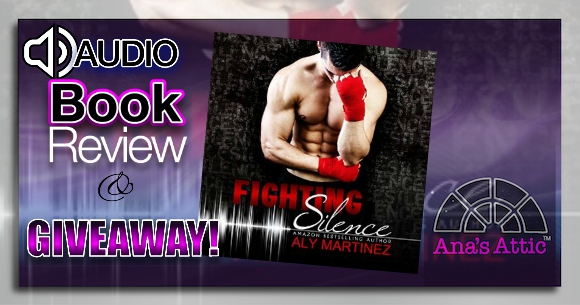 Emotional New Adult. Stands alone, but there is more in the series.

Megan has been telling me what a genius Aly Martinez is, but with all of the crap I have been going through the past 6 months, I just didn’t have time to pick up any of her books. But then I saw Fighting Silence was on audiobook and I just couldn’t click fast enough.

Whatever you do, don’t mistake this as being just another fighter book. Oh no, it is so much more, filled with enduring love, tragedy, family and romance. It’s a childhood-to-adult love story that is really sticking with me. Till Page and Eliza Reynolds both came from very neglectful homes (and worse). As young teens, they both escaped from their homes to a little abandoned apartment in a condemned building, climbing through the window to escape their homes and find solace in each other.

Till and I both knew we had a strange relationship. It was more than a friendship, but there wasn’t romance or sex. There was definitely love though. Immeasurable amounts of it….Till Page was my soulmate on every level.”

Eliza was a fantasy to Till. She represented everything he dreamed of but could never dare to have. He didn’t want to saddle her with his very uncertain future. Till was raising his two younger brothers as well, and life was a struggle for them. He just couldn’t chance losing Eliza. Yet she was SO in love with him.

It had become more and more difficult to stop myself from kissing her, touching her, claiming her. But I knew that, if I did, I would eventually lose her. Relationships didn’t work in high school. Something would have happened, we would have broken up, and then I would have lost her completely. I needed Eliza too damn bad to ever chance that.”

Things happen, years pass. But Eliza is still a fantasy to Till. He still goes through his fantasy window.

I fell in love with a man whose fantasy is crawling through my window to escape reality. All the while, my fantasy is walking out that door to navigate reality by his side.”

Till worked his fingers to the bone making a decent life for him and his brothers. And he spent every other waking moment at the boxing gym. When the opportunity to become a professional boxer came up, things couldn’t have been better, except he was quickly losing his hearing, and the prospect of being a deaf boxer was daunting.

You’re a fighter Till. This is no different.”
“I can’t fight the inevitable.”
“Maybe not. But we can.”

The last third of the book was a fast moving action movie! I loved the whole thing, but the end had me sitting in the car in my driveway, unwilling to stop listening.

Here is the thing though…..I really disliked the narrator at first. In fact, until I was about 45 minutes in, I was thinking of giving up on the book. It started with a girl’s voice doing a guy’s point of view. When it changed to her POV it got better, and when the story took over, I forgot I didn’t like the voice. Now, I hear it in my head. A memorable voice, and now I like it! 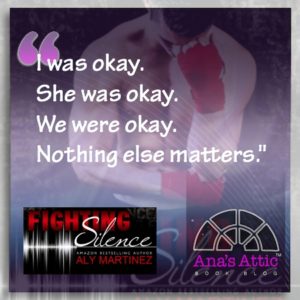 The Down and Dirty:

Fighting Silence was my first Aly Martinez book, and I immediately downloaded the rest of her currently available audiobooks. While I didn’t love the narrator at first, she grew on me. The story itself was one of the best I’ve listened to. It was a little new-adulty for me, but that’s OK, because their love defied age. So much happened in this book! It was packed with action, love, family and heart. I can’t wait for more from Aly.

Book three, Fighting Solitude, is coming next year.
I hear these also spin off of the Wrecked and Ruined Series. 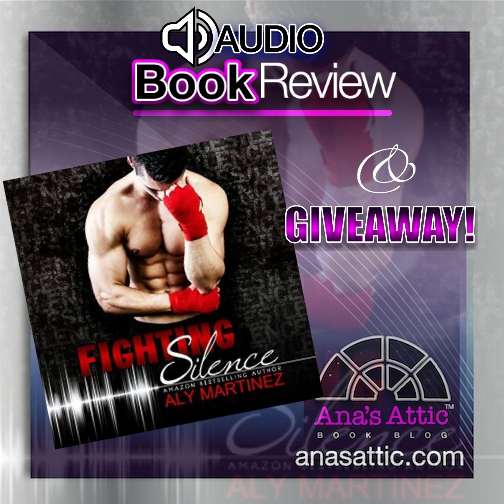