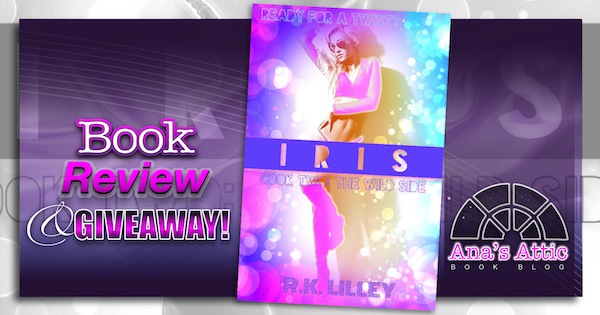 “Me, I was simple. I was order. A very neat, efficient machine that ran on nothing but air… And me plus Iris, that was a monster of a machine, with all gears going at different speeds, some spinning off their hinges, just going mad, but it was a wonderful madness, at full throttle, misfiring in all directions.”

Wow, The Wild Side series is just blowing me away. I really don’t like ‘serials’ normally. By the time the next book comes out, I have lost interest. But in this case…HOLY SHIT. This series has me by the (by the what? I would say balls, but I don’t have any!)  and just doesn’t let you go. In fact, after IRIS (part 2 of 3, see my review for The Wild Side, part 1 here) I am left with more questions than answers. I want to decipher every word and action to try to figure out the puzzle that is Iris, only I’m left more intrigued and perplexed. The few theories I tried out on RK were shot down. I seriously have NO.CLUE. And I love it.

Why is she with Dair?

Where does she go?

Who is the other dude?

What is she hiding?

“It was Iris, but Iris was a stranger…  Which one was the real Iris?”

For two months Dair has tried to move on with his life without Iris. He has gotten a little more social, started hanging with other authors, but he is just existing. His world was completely turned upside down by Iris and it hasn’t been righted yet. She awoke something in him that even he never knew existed, and she is like a drug that he physically craves. He looks for her everywhere, and as he is about to give up, there she is.

“She was soothing chaos. Like that first taste of anaesthesia, before you lost your senses. Or the venom that numbed you before it killed you. I really couldn’t decide which.”

Once he has her back, he doesn’t want to let her go. But her time is not her own. Dair has no idea where she goes when she leaves, why she stays away. All he knows are her lies and omissions. Though he knows she is lying he still can’t help himself. He is powerless to her.

“I don’t have good judgment when it comes to you”
“Maybe good judgement is overrated. Maybe it’s time for you to be BAD.”

Poor Dair is in heaven every second he has with her, while at the same time he’s in hell knowing she’d leave again.

As always, RK writes a HOT book. Bit IRIS is so much more, it’s completely edge-of-your-seat unputdownable. You NEED to know what’s going on with her. What is she up to?

R.K. Lilley was already one of my favorite authors with The Up in the Air Series and the Tristan and Danika Series. The Wild Side Series is now right up there with them. The story is memorable and unique, a total mystery that I can’t get enough of.  The anticipation of the next book and finding out what is really going on is all part of the rush of reading this series. I honestly think that reading them a month apart works so well for the series. So much so, that if you are waiting to read all 3 books together, I would advise you at least read another book between them. Don’t ruin the suspense that is built in to the three part series. That being said, I can’t freaking wait to get my hands on the next one!

“In a world full of lies, you were my truth. You were my light and my compass.” 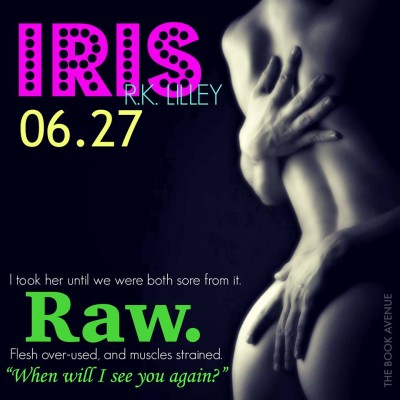